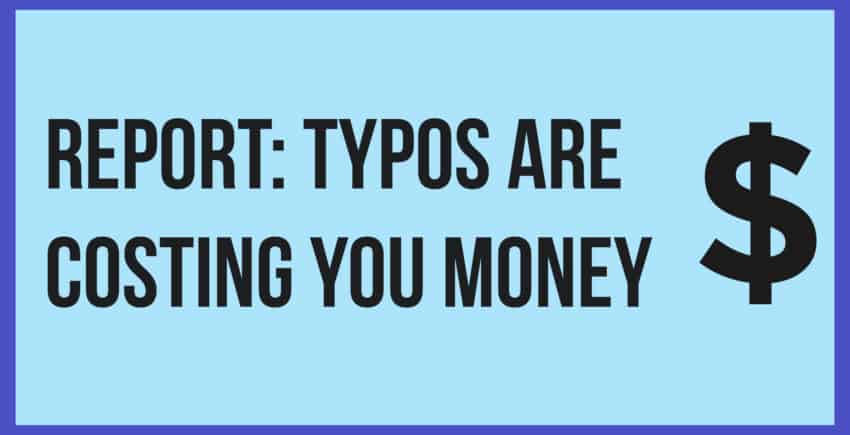 This article is brought to you by websiteplanet

In an age when verbal slag is normal and it isn’t uncommon to see messages with grammatical and spelling errors, it’s easy to assume that typos are a part of everyday life and, therefore, should be of no consequence to website copy. But we were curious: in an industry such as ours, that relies on compelling content to move visitors through the sales funnel, do good grammar and spelling matter?

To figure it out, we ran A/B tests on both Google ads and landing pages to learn if our content team is right, and typos do cause issues, or if our marketing team’s belief that typos don’t matter would reign supreme.

We decided to run two tests. The first test centered on the actual Google ads. We wanted to see how many clicks each ad would receive and measure the click-through rate (CTR) as well as the impact on cost (if any) when typos are made.

Here are the three ads we tested. The first is the “clean” ad, with no grammatical errors. The next includes what we considered to be a “moderate” typo, while the last is more “extreme.”

The second test was designed to take a closer look at user behavior on the actual landing page.  Are people more likely to bounce from a landing page that has many errors? Or do they just not care?

Here’s a screenshot of the good page: 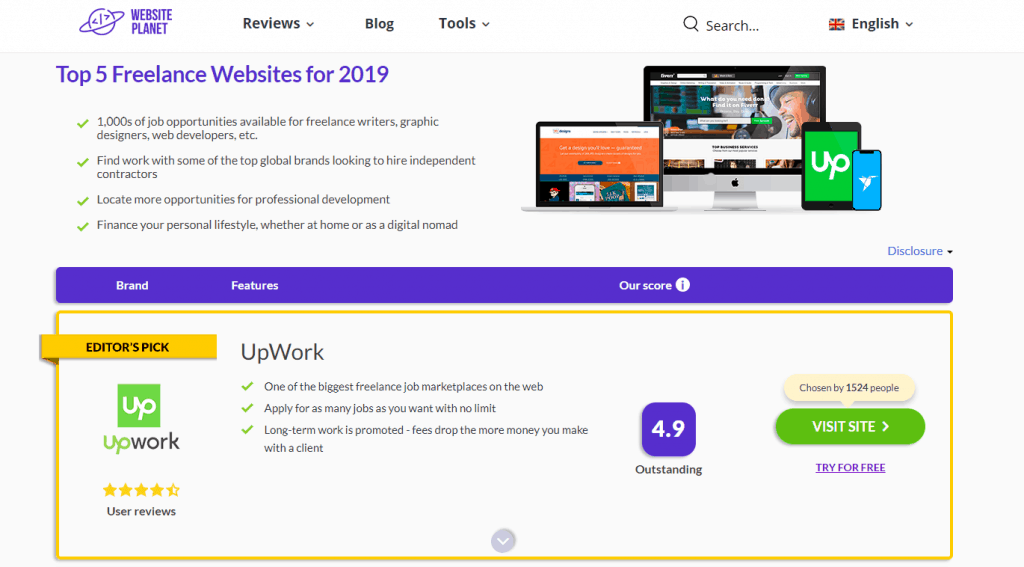 Here’s a screenshot of the bad one. How many typos can you spot? 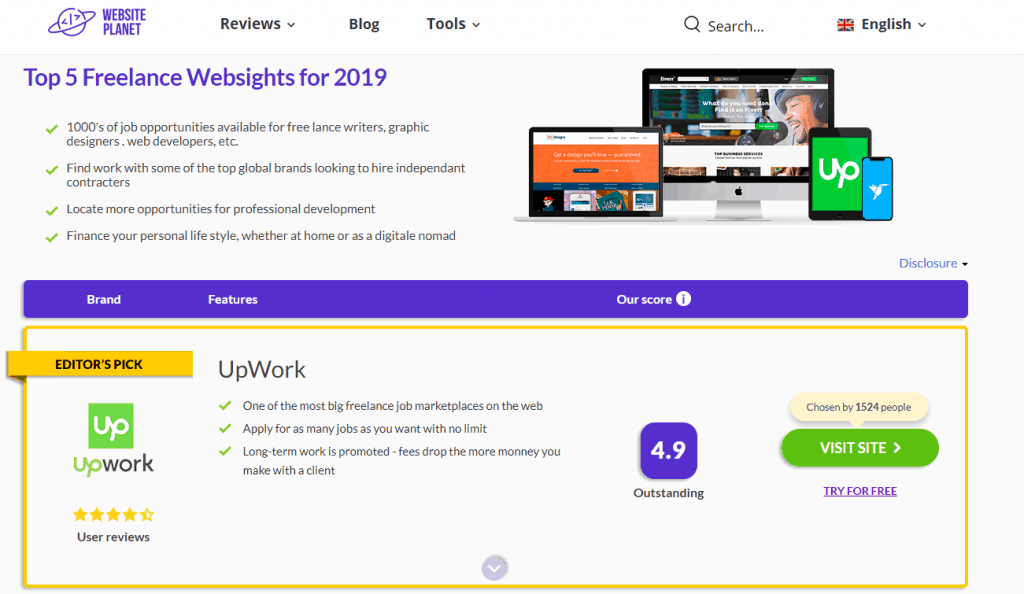 So here are our hypotheses:

The Results & Changes to the Site

Result #1: Typo Ads Resulted in a Decrease of up to 70% in Clicks Compared to Correct Ad

Not only did users notice the typos in the ads and, therefore, click on them less, but Google’s algorithm also picked up on the reduced CTR and required us to pay more per click.

Interestingly enough, we noticed a huge difference across the different geographic groups. In India, a non-native English speaking country, the ad with the grammar mistake (Compared) surprisingly came in first, while in the US and the UK, the ad with no typos did the best.

However, there was a bit of a gap – people in the UK care more about grammar than they do spelling. The ad with the grammatical mistake (Compared) did much worse than the one with the spelling error (Comper). In the US it was the other way around.

We also ran a global campaign for non-native-English-speaking visitors (searching in English). It is fascinating to note that there was close to zero effect on the performance of the ads. While this makes sense (as they aren’t proficient in the language, they might not even notice the mistakes), it is definitely worth mentioning.

As previously mentioned, when your ads contain typos, not only do you lose a lot of potential visitors, but you will spend a whole lot more money on the ones you do manage to bring to your landing page. 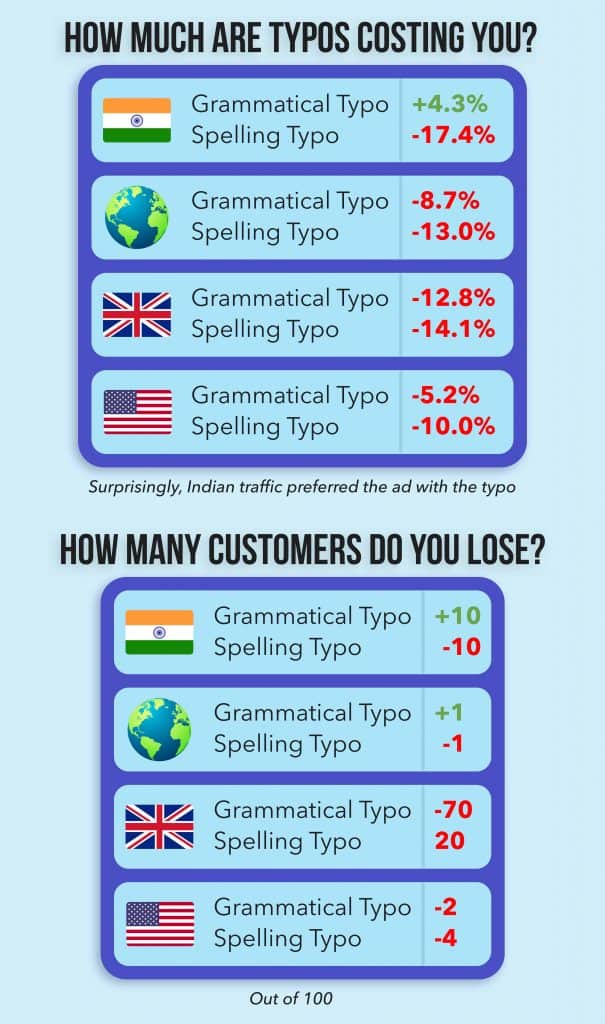 While in the US, you need to pay up to 10% more if you make a typo, the Brits will punish you even further with 20% more for typos and 72% for grammar in the extra cost per click. (*The ads in the UK where shown to more than 600 users, and getting clicks on ads with typos was close to impossible, hence the low number of clicks for these ads.)

We also spotted a trend whereby the position of the ads with typos dropped down in SERPs. For example, in the UK, the average rank for the clean ad was 1.1, but the typo ads were 1.2.

Our PPC team explained it to us – since ads with typos received fewer clicks, Google lowered their position. And over time, with the drop in position, we would lose even more clicks and pay even more money.

(A difference of 0.1 might not sound too dramatic right now, but keep in mind that we only ran this test for two weeks and we set the same target CPC. This was Google clearly punishing us. And had we continued to run the ads even longer, we guarantee there would have been a further drop in rankings.)

The problem for advertisers is this: if you don’t have a grammatically correct ad, but only one with a typo, it won’t be your ad that shows up in Google, but rather your competitor’s typo-free ad.

Result #2: Typos on the Landing Page Increased Bounce Rate by 85% and Reduced Time on Site by 8%

Moving onto our landing page experiment, we saw there was a more significant difference between the two pages than we expected.

According to a popular Cambridge University study, the order of letters in a word does not matter – as long as the first and the last letters are in the right place, the word will still be readable. We made the assumption that, therefore, typos on our landing page would not be as dramatic as the ones in our ads.

To our surprise, and the content managers’ delight, we saw that the bounce rate for the landing page with the typos was 85% higher than the clean version. (The bounce rate is the percentage of visitors who leave your website after only looking at a single webpage.)

We should also note that time on site was reduced by 8% on the page with the typos.

*No, Google does NOT look at typos as a signal for ranking, BUT they do clearly have an impact on user behavior signals that DO count.

We also noticed a sharp difference in user behavior on the site from a “session duration” perspective. On average, a visitor who landed on the typo-free page stayed 8% longer on the site (which is explained, in part, by the difference in bounce rate).

How Did This Report Change Our Work & How Should It Change Yours?

This was a quick test and we were not able to cover everything. One major thing we’d like to examine next is the overall impact on sales.

This study cost us a few thousand dollars to conduct, and we didn’t travel the whole way through the sales funnel to see how many people clicked through and bought the product (or in our case, subscribed to a freelance service). For this, we would have to spend at least 10x more. But we strongly believe there would be a negative impact on sales.

Even if visitors stay on the site and do not bounce, they may still have less trust in us, thinking that if there are mistakes on this one page, they don’t want to know how many mistakes there are throughout the entire website.

Note: How this Test Came to Be

The need for this research stemmed from an argument between the content and marketing teams. The content team put in a request to hire better (read: more expensive) writers, arguing that the quality of work impacts the achievement of the website. Better content = better KPIs.

The marketing team did not agree, claiming the proposed content budget was “too high.”

The content team manager, seeing the budget allocated toward Google ads, suggested that the difference of hiring more expensive writers would be quickly covered by the better results of properly-written ad campaigns.

The manager of both teams suggested an A/B test to see who was right and who was wrong.

The outcome is that the content team received their budget requests and now the entire company knows that spelling and grammar matter. Need we say more?

It doesn’t matter what you are writing about – your spelling and grammar represent you and your business to your audience. Proper writing sends a distinct message to your visitors: Hey, you can trust me and feel safe when you buy from me and/or use my services.

Poor grammar, as we can see, will harm your credibility. Your ads are glossed over as you spend more money driving traffic to your website, in the same way, we overlook resumes with poor spelling and grammar and make snap judgments about a writer’s level of intelligence when articles are rife with silly errors.

Plainly put – we lose confidence when we see mistakes, and businesses lose the impact of their message. We may joke about “the panda eats shoots and leaves,” but the truth remains the same – if you want to do good business, proper spelling and grammar are essential.